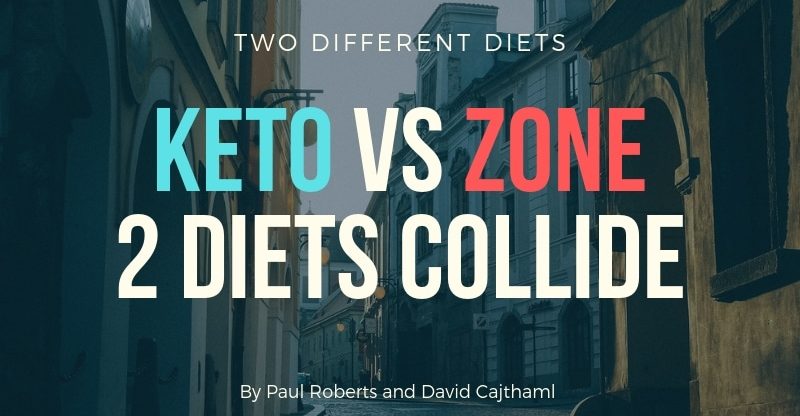 The authors of this post (David and Paul Roberts) discuss varying viewpoints on whether the ketogenic diet should be implemented.  Here’s what you need to know about going Keto.

Sand & Steel doesn’t teach the ketogenic diet as part of its weight loss system.  However, we felt publishing this article was important because of Keto’s recent rise in popularity.

“The ketogenic diet works for some people for the following five principles:

Most dietitians do not support the use of the ketogenic diet, because it puts a strain on your kidney systems.  Numerous studies establish that Keto does more harm than good. 3  The ketogenic diet is nothing new… it’s been around for a long time… advertised by many people before.  Adkins made this diet popular … as did South Beach.  Does it work?  For a while yes.  It also causes decreases in energy levels, zaps muscle strength, and makes gaining any muscle-mass very difficult.

It has long been my opinion (and still is despite Keto’s recent surge in popularity) that is safer to balance carbohydrates in the Zone ratio.  There are some additional factors you’ll need to consider as it applies to carbohydrates, so please listen to the associated Soundcloud / Podcast. Paul on Keto 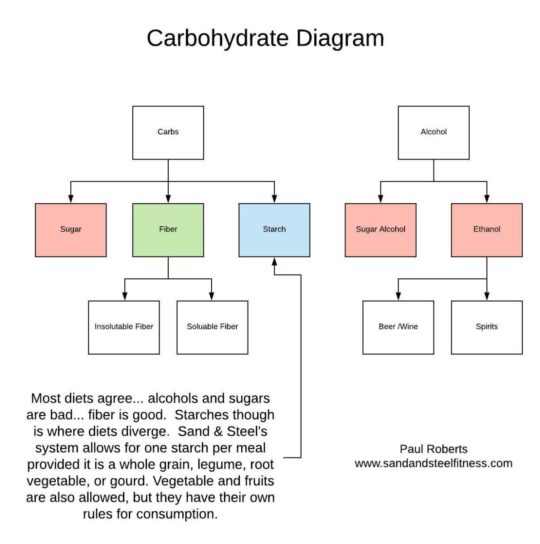 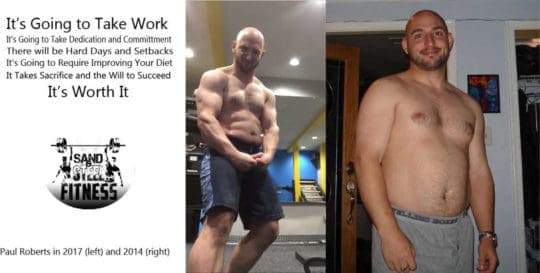 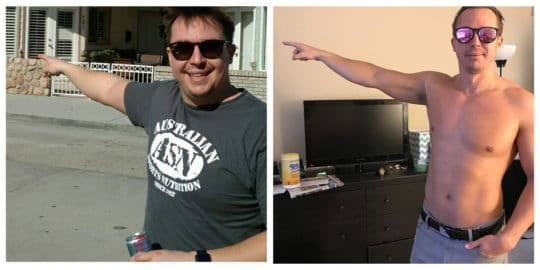 Read Guest Post Author David's Personal Experience with Keto
Early on in my recovery from addiction I really put on some body fat. The drugs that were impacting my metabolism and curbing my hunger were no longer there. I was exercising very often and so I thought I could eat as much as I wanted to. I didn’t even realize how much fat I had accumulated until a true friend expressed his concern for me. When I wasn’t getting it, he had to come out and say it: “You’re fat!”. I was borderline obese and didn’t realize it, that harsh reality may have saved my life. I took action and started where many people do: by counting calories. I was around 27% body fat and over the course of a few months, I lost about 5 pounds. I was losing weight but very slowly — I didn’t understand it. I was exercising vigorously for more than an hour a day 5-7 days a week, and I was at a caloric deficit. I barely lost any weight. I was frustrated and ready to try something new and bold. In a nutshell, the Ketogenic diet involves eating around 70% fat, 25% protein, and around 5% carbohydrates. The diet was shockingly effective. I lost 40 pounds in about two months. What is even more shocking is that this result is not uncommon. If you browse internet spaces, such as Reddit, you find the same thing over and over — massive body fat loss. What is even more shocking is that some people lose weight while eating at a caloric surplus. That is, even though they eat more than they need they are still losing weight. How is this possible? That doesn’t make sense according to the most common model of weight gain/loss: CICO, or “Calories In, Calories Out”. Before starting the diet, I did a lot of research. However, a lot of the research is still emerging and relatively new.

The following discussion on insulin and ketogenic was written by David.  The only comment Paul would raise is that his infographic oversimplifies the role of insulin.  You can successfully lose weight when you have insulin present in your bloodstream.  Insulin is a required hormone for body function.  We both agree though that eating too much carbohydrates will create weight loss problems in certain populations.

Insulin is the storage hormone.

If your body releases insulin it is placed into storage mode. Insulin is released when your body has to remove glucose (“sugar”) from your blood, for example when you eat carbohydrates. So, if you’re constantly eating carbohydrates, your body is constantly releasing insulin. Studies have shown that you can gain weight while on a caloric deficit if insulin is injected into the body. This means that if I were to follow you around all day and every time you ate something I inject you with insulin, no matter if all you ate was broccoli, you would gain fat.4

Your body can become tolerant to anything. If you do 100 squats every day, eventually it will be easy, your body adapts to it. If you become addicted to drugs, your body needs more and more of the drug to produce the same effect because your body adapts and becomes used to the drug. The same exact thing happens with insulin. Your body can become resistant to its own hormone. If you eat carbohydrates, your blood glucose (sugar) rises. Your body detects this, releases insulin to remove the blood sugar, and your body is placed into storage mode as a byproduct. If you were to eat enough carbs over time your body would need to release more and more insulin and your body would be placed into storage mode longer and longer. It is absolutely no coincidence that an overwhelming majority of people who are obese have type 2 diabetes.

The hormone insulin determines what brown fat cells and white fat cells do.

If insulin is present brown fat will actually act more like white fat and store energy. On the other hand, if insulin is not present, over time, white fat will act like brown fat and convert energy into heat. White fat cells will also shrink as a result of burning energy. You will always have the same amount of fat cells in your body. It’s the size of these fat cells that is the issue.

Brown fat is the reason your body can lose fat while eating at a caloric surplus, as long as insulin isn’t being released your body will just burn off some of the excess calories as heat through its brown adipose tissue.

Calories in, calories out, and the idea that your body is a perfect thermodynamic system.

CICO basically states that if your body needs 2000 calories a day, and you eat 2250, you will gain weight (caloric surplus). Conversely, if you eat 1750 calories a day you will lose weight (caloric deficit). This has been the long-standing explanation for weight gain and loss. However, it does not factor in hormones, mainly insulin.

Say that your body needs 2000 calories a day to maintain weight. If you were to eat at a deficit of 500 calories, so around 1500 calories per day, you would start to lose weight but over time your body would re-adjust to the deficit and “make” your new BMR in line with the reduced consumption. The body is smart, if it realizes it’s starving it decreases the energy burned to protect itself.

Let’s look at the last few points a little more closely. If you eat 2000 calories a day but 500 of those calories are converted by insulin into fat (that your body doesn’t need or want) your body is actually starving. You have just put yourself into a caloric deficit. If this were to continue you would gain fat, and your BMR would continue to decrease, as a natural defense mechanism to your body “starving”.

Time to connect the dots! Insulin is like your body’s on/off switch for its “storage mode”. Without insulin, you literally cannot gain weight (Type 1 Diabetes). When insulin is present in your body, your white fat cells get larger and your brown fat cells burn very little energy as heat. When insulin is released, your body starts converting glucose (sugar) into fat no matter what. So, if you were to eat a cheeseburger and fries, say 1500 calories, around 500 of those calories would be turned into fat because of the insulin that was released when your body detected carbohydrates. If you were to eat carbohydrates your whole life from birth until now, your body would be releasing insulin a lot. This leads to what most of the western world suffers from, Insulin Resistance, or its exacerbated version, Type 2 Diabetes.

David is discussing a disease known as insulinemia. I’m not sure whether he was tested for this or not. There are various causes for insulinemia. While treatment for insulinemia can be complicated (there are various causes), testing for it is rather straight-forward.  -Paul
David writes “When I started to count calories in order to lose weight, I lost weight slowly.  I believe that I was insulin resistant. Every time I ate even a few carbs, his body would release tons of insulin… which put his body into storage mode and immediately turned some of my calories back into fat. Worse yet, because some of those calories were being turned into fat I was actually not eating enough calories! My body thought it was starving and slowly decreased the amount of energy it burned to protect itself, my BMR was reduced. The moment I switched to a diet that induced Ketogenesis the weight started to melt off of me, literally! Without insulin, my brown fat started to burn energy and turn it into heat. Without insulin, my white fat started to do the same and shrink in size. Without insulin being constantly released my body was not constantly converting energy into fat. On top of that, my body no longer thought it was starving so my BMR returned to normal, I was burning MORE energy naturally.”

David concludes, “With all of these puzzle pieces collected, I finally was able to understand why Keto is so effective. In summary, insulin plays a huge role in weight gain and weight loss. Eating more or eating fewer calories has an effect but if you want to gain or lose weight you need to modulate your insulin levels. To produce more insulin eat more carbohydrates and eat more often. To produce less insulin, eat less often, and do not eat carbohydrates.”

Paul adds, “For readers very interested in clinical tests of the Ketogenic diet vs. other diets (or in certain populations), I recommend you read through Ruledme’s excellent article with white paper citations. If you read through that article, you’ll see that people do get varying results from using Keto compared to other methods. The skill of your nutrition coach isn’t whether or not they correctly explain a diet to you. It’s whether they can identify which diet (out of the hundreds available) will work for you. And… whether that nutrition coach can efficiently and correctly make sure you are complying that the rules of that chosen diet.”