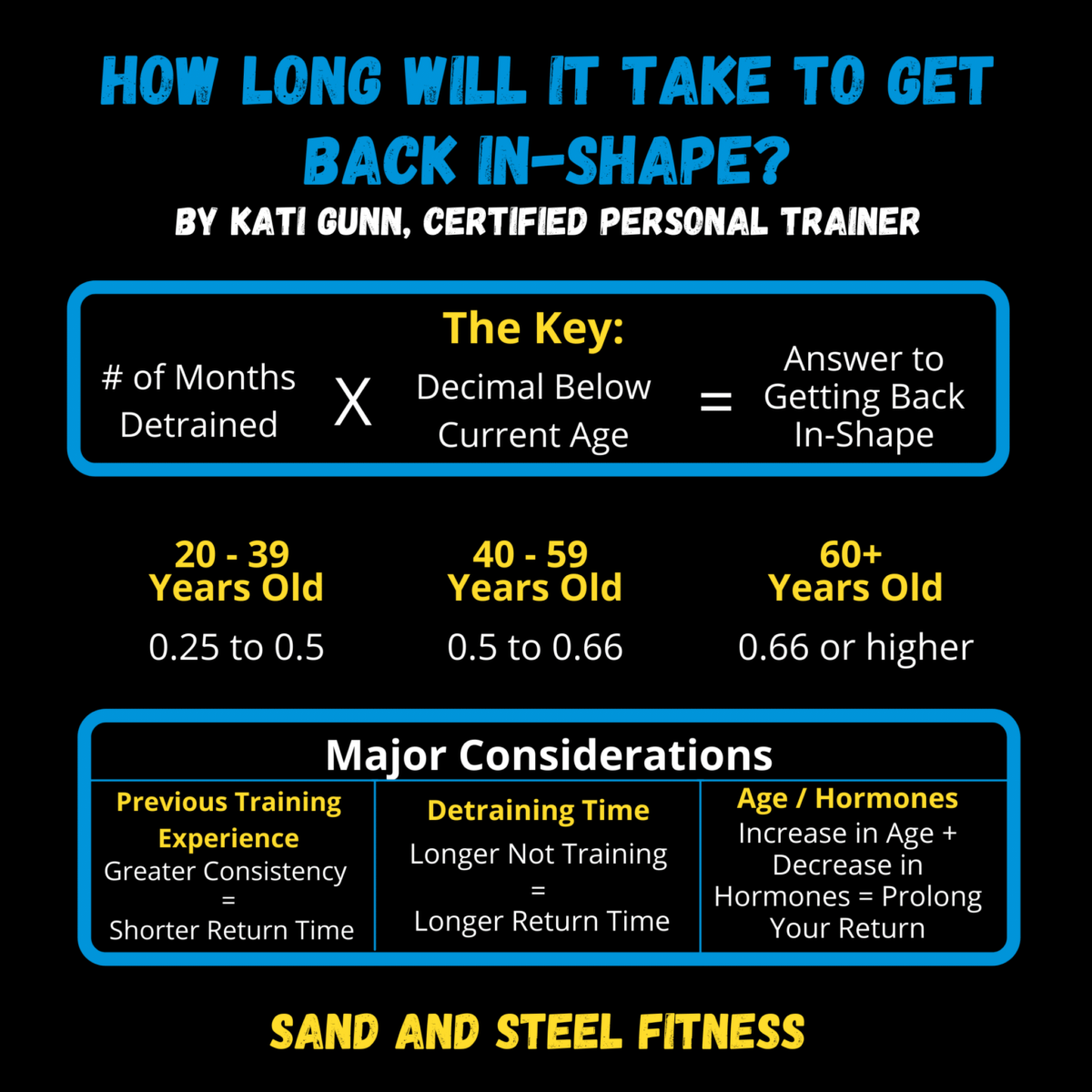 How long does it take to get back in shape? We analyze this question across different ages, gender, and skill levels to distill a clear answer.

To help you understand how I arrived at these answers, I will explain the process. I reviewed other scientific research on this specific topic and others that would pertain to this question. The first study involved mice being trained in a lab for eight weeks, going through a 20-week detraining, and one group was returning for eight weeks. Next, I reviewed two separate studies on males and females from 20-30 years old and 65 to 75 years old. Which required them to train for nine weeks, detrain for 31 weeks, and tested to see if muscle size and strength, among other factors, were retained. Then I asked the question at what age do humans start to lose muscle and the annual percentage, which required me to review a few different studies on that information. After reviewing all information and working with various athletes, I came to the following conclusion.

60+ years old, it will take you 2/3rds of the time you have gone through detraining.

I will provide you with three different examples.

As you read through this, you probably have one major question.

Why does it take Jamie longer to return to being in shape than Todd or Alice?

There are a few different reasons.

First, Jamie is 72 and has already gone through menopause, causing her estrogen levels to decrease drastically. Estrogen is vital in improving muscle quality while training. The same goes for a male’s testosterone level, which starts to decline by 40.
Second, she is past the age of 50-years-old. Science has determined that every year after 50, the cross-sectional area, or size of your muscle cells, decreases by around 1% annually.
Third, as your body ages, other risk factors occur because of cellular decay, like increased inflammation, which makes a recovery for a workout longer. A neurological decline can increase an individual’s risk for downward movement and decreased protein synthesis.

Todd’s return will be affected by all these same factors, but not as extensively has Jamie because of her older age.

You must know, these numbers cannot be exact, only estimates because science has yet to conduct an experiment with such magnitude and specificity. You will also notice that all of the examples provided have a long and consistent training history, which is a significant contributor to their return. None of them sustained significant injuries or medical condition(s).