Columbus Day Sale
Save 35% on Most Memberships

If you own a pair of parallettes, you’ve probably discovered that they are an excellent source of instability for your shoulders, and your feet if you stand on them.  When you loop in a Surge (a water filled tube with handles), then you have instability in your core and shoulders as the water sloshes around.  When combined, they make for a truly grueling duo. 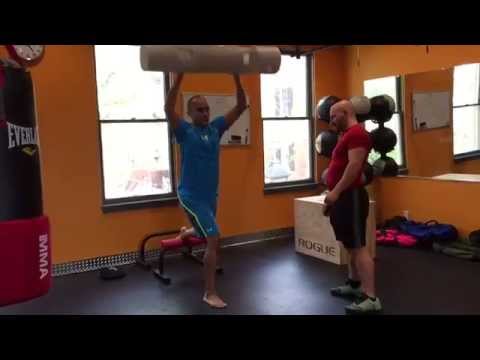 Make sure you check out the bonus videos at the bottom.  It’s a very original movement designed to provide an important progression for the pistol squat.

1 Leg Glute Bridge 8/10.  The parallette offers a very stable platform to work from.  The only piece of equipment that’s better is probably the medball for doing 1 leg glute bridges.

Parallette Bulgarian Lunge with Surge Overhead Hold 10/10.  This move is tough.  It works your core, shoulders, balance, everything.  Tip: use a squat sponge on the parallette so the base is soft for clients.  It pairs well with the 1 Leg Glute Bridge since it also works glutes.

[sociallocker]Decline Parallette Pushups 10/10.  Don’t own a bench press?  This move is about as close as you can get to the real thing… and not much easier.  For more fun, don a weight vest :-).  Here, we demonstrate using a plyo box.

Parallette L-Hold with Scissors 10/10.  The L-Hold is probably the granddaddy of parallette movement.  The alternating scissors crank up the difficulty two notches for sure.  If you’re clients can’t hold and L-Hold, simply have them do L-hold on the rings and then dips on the parallettes.

Parallette Hurdle:  In a pinch, parallettes can be used a hurdle.  We opt for sandbags usually since they are a bit safer.

The Suspended Pistol Squat: Pistols squats are tough, and progressions are hard to find.  The two easy ones: The suspension trainer pistol squat or the box pistol squat are good… but it’s still a long way to a real pistol squat.  So we hereby introduce the Suspended Pistol Squat.  In the videos that follow: you’ll see Paul Roberts demonstrate the movement using the TRX Suspension Trainer and Jesus use the Olympic rings.  The Olympic rings are easier because they do not slide back and forth.